Meriwether County’s history dates back before recorded times when the Indians used its paths for trading routes, the 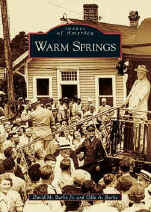