Gay, Georgia, was a quiet farm community with an active business district located on the main highway connecting Atlanta and Columbus as it faced an uncertain future in 1971. Agritourism had yet to be coined as a word in 1972, but it has played a significant role in economic change in Gay. The Cotton Pickin’ Fair (cpfair.org) is Georgia’s premier agritourism event. On the first weekends of May and October, more than 30,000 visitors to Gay enjoy a 21st century celebration.

The History of the Cotton Pickin’ Fair 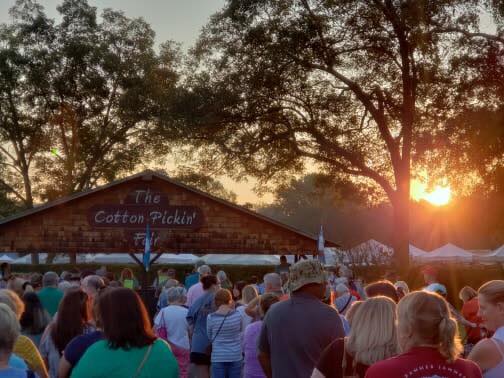 The Cotton Pickin’ Fair is sponsored by The 1911 Society, Ltd., a Georgia not-forprofit corporation supporting sustainable rural development through agri-tourism, and is a seventh generation family business featuring a very unique venue and patron experience. In 1972 the Gay Family determined that the old cotton gin and other farm buildings would become the backdrop for an “invitation only” antiques, art, and craft festival produced to promote Gay, Georgia and Meriwether County as a good place to live.

Meriwether County civic clubs, schools, churches and a wide range of non-profit organizations have exclusive access to food concession operations raising funds for many worthwhile community projects. For more than 40 years, funds raised at The Cotton Pickin’ Fair have paid for church buildings, a Masonic Lodge, band uniforms, school grounds improvements and church missions abroad. Smaller nonprofit organizations receive substantial support from The Cotton Pickin’ Fair through commercial food concessionaires. There are no better southern foods, anywhere! The COTTON WAREHOUSE, now The Cotton Pickin’ Fair Antique Center, dominates the grounds and was built before 1910 as a farm and building supply center. Later it was used to store a few thousand bales of newly ginned cotton.

The BASKETMAKER’S CABIN began life as part of a grist mill dam on the Flint River; timbers from that dam were used to construct a corn crib on the farm, which was relocated to it’s present location forty years again.

The HAMMERMILL, near the center of the grounds was built to store corn as it was brought in from the fields and later ground (hammered up – shuck, cob, and all) into cattle feed. On the outer perimeter of this building there were low sheds with feed troughs where many steers have been fattened. Festival information is at the building center and the west end the building provides a rustic stage for continuous entertainment. The existing Cotton Pickin Fair enclosure generally follows the old feedlot fence.

Southeast of the HAMMERMILL is a brown, octagonal building. Now, the Greenville Masonic Lodge BBQ, this building was a bulk fertilizer storage bin. The SEED COTTON HOUSE was used to store seed cotton, or cotton with the seed still in it (just as it comes out if the fields before ginning). Seed cotton was stored in this building so a gin customer would not have to wait in line and the cotton was transported to the gin through suction pipes. SEED HOUSE A was used to collect and store cotton seed as it was separated from cotton during ginning. The buildings held about 400 tons of seed awaiting sale and delivery to cottonseed oil mills in Macon, Rome, and Atlanta.

The COTTON GIN is a two story tin building once filled with machinery used to dry, clean and remove the seeds from cotton. Cotton was compacted into bales of approximately 500 pounds, covered with jute/ burlap bagging, and strapped with steal bands in the bale presses. The Cotton Pickin’ Fair gin last ran in 1971. Up the hill from the gin sits the GIN SCALE. Wagons or trucks drove onto the scale fully loaded and again after unloading to determine how much cotton was delivered to the gin. Today it is a rustic stage featuring the country music of The Honey Creek Boys.

The PEACH PACKING SHED, a large metal covered, wood timber frame building near the south gate, was built in the early 1900’s. Downstairs, peaches were packed into wood crates assembled by workers directly overhead, on the second floor. Crates of fresh peaches were then loaded onto rail cars by conveyor or onto trucks for delivery across the country (New York City was an important market.). A rope drawn freight elevator in the center of the peach packing shed is still useful, today.

The 1911 BUILDING is a three-storied red brick building built to house J.R. Gay & Company in 1911. This unique structure has a third floor, eight room apartment complete with a ballroom; actually, a small warehouse for the store, but in 1911, J.R. Gay was an eligible bachelor and someone had to host social events in thriving Gay, Georgia. The main floor housed the farm office, general store, and post office; the basement housed the grocery department. The West Gate of The Cotton Pickin’ Fair is the former front door of this building.

Adjacent to The1911 Building is the BLACKSMITH SHOP, home to The Cotton Pickin’ Blacksmith. The small red brick building originally held the Delco Battery Plant that provided 28-volt DC electricity to the town of Gay during the very early part of the 20th Century.

The W. F. GAY 1891 HOUSE was built by the town’s namesake, William Franklin Gay, in 1891. Judge W.F. Gay was appointed to serve as the town’s first postmaster in 1886 and was appointed to serve as mayor when the Town of Gay incorporated in 1906. W.F. Gay also served as Chairman of the Meriwether County Board of Commissioners when the Meriwether County Courthouse was constructed in 1904. Hollywood came to Gay to film the major motion picture, “The War”, starring Kevin Costner and Elijah Wood. Scenes of this movie were filmed during the October 1993 Cotton Pickin’ Fair; festival visitors continued their shopping, and didn’t seem to notice the boom truck and camera crew filming Mr. Wood and Mr. Costner, as they made their way through the fairgrounds.
Hollywood returned during the winter and spring of 2011 as the Fair hosted yet another major film production on the grounds of The Cotton Pickin’ Fair. “Lawless” staring Shia LaBeouf, Tom Hardy, Guy Pearce, Jason Clarke, Jessica Chastain, and Mia Wasikowska and directed by John Hillcoat was released August 29, 2012. This great story-telling movie was adapted from the book “The Wettest County in the World” by Matt Bondurant. In 2014, we provided sets for James Franco’s movie, “In Dubious Battle”, based on John Steinbeck’s first novel.